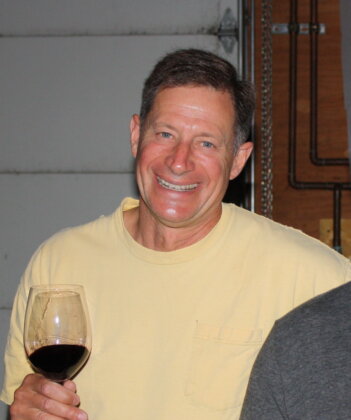 Bill Pesonen learned about wine early… well before he was old enough to drink it and long before he ever thought about making it.

Bill’s parents were wine connoisseurs and discovered Napa Valley when legendary characters like Louis Martini were still running simple tasting rooms. A master marketer as well, Mr. Martini welcomed kids into his winery and gave them a little taste of diluted wine, and then sent them to explore the winery and barrel room while their parents tasted and bought wine. Bill recalls: “I always remembered those smells, the ambiance, the aging fruit in casks and the cool cellar environment.”

During his long career as a pilot in the U.S. Air Force and at American Airlines, Bill studied and honed his understanding of wine as he prepared to become a grape farmer and winemaker. Now, on his eighteen acres in the Asti/Cloverdale area, Bill grows ten acres of grapes and two acres of olives. And he does it all, from planting, to pruning, to picking.

Bill purchased his property in 1996, and moved in to and remodeled an old farmhouse there while initially planting five acres of Cabernet Sauvignon in his namesake Pesonen Vineyard in 1998. In 2006, three acres of Petite Sirah were planted in the neighboring Perry Vineyard, and he added another two acres of grapes in 2007. Two hundred fruiting olive trees and a tranquil irrigation pond round out his property’s beautiful rolling hills and southwestern facing slopes.

The Pesonen winemaking philosophy is to plant hillside, low yielding red grape varietals and then harvest them at optimal ripeness. Bill’s grapes are hand-raised and nurtured for absolute excellence, and his efforts have been rewarded with a significant number of gold and double gold medals from the top California wine competitions – click here to check out his award-winning wines. Alexander Valley is known for excellent Cabernet Sauvignon and this is what you will find in a bottle of William Gordon wine. He has also sold grapes to outstanding wineries like Jordan, where longtime and prominent winemaker Rob Davis was a mentor, as well as Silver Oak and St. Francis.

If you would like to meet Bill, visit the winery, and enjoy a private tasting, click the BOOK NOW button above to make a reservation. He loves to share his wine, and to discuss the finer points of wine making, so please, reserve a couple hours of his time and drop by soon!

In addition to his own private tasting facility, Bill’s wines are also available at Locals Tasting Room in nearby Geyserville.